Sign In /  Sign Up
« Continuum », Martian sunset simulator
Based on scientific data and a numerical simulator, the project is a reconstruction of a sunset as could be observed on Mars in...
Félicie d'Estienne d'Orves
+
"Eyes on Mars"
Start of Residency
End of Residency
Artistic ProposalTech ProjectArtistOutcome
"Eyes on Mars"

The team develops numerical Global Climate Model and various simulation tools in order to simulate the details of the environment on Planet Mars (temperature, winds, clouds, snow, etc.). The aim of this modelling is high: ultimately to build numerical simulators based only on universal equations, yet able to consistently reproduce the available observations obtained by the space missions that have explored Mars. The goal is to create a realistic virtual planet that behaves like the real one. This allows to predict the Martian environment when needed and to interpret new observations. Visualization of the environment on Planet Mars based on available data and numerical simulations of the diurnal variations and the seasonal variations. 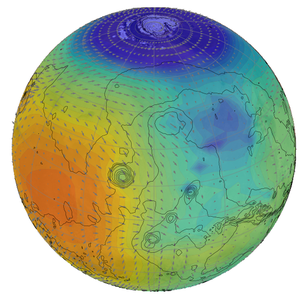 The « Continuum » project is a visual simulator of the Martian sunset based on scientific data collected alongside researchers specializing in Mars and its atmosphere.

The collaboration with the Dynamic Meteorology Laboratory (LMD) of Jussieu would be a great opportunity to integrate a visual simulator, real-time environmental data provided by The Mars Climate Database Projects. The main outcome of the collaboration with LMD would be the integration of atmospheric scientific data (wavelengths, turbidity, Rayleigh scattering, Mie scattering,
etc.) so as to reproduce and very slowly animate the aura of the Martian sky following the sun’s position. The program will be manipulated and operated by the artist and scientists to experiment and seek out gradations consistent with the scenario of the Martian sunset.
The other aspect of the IT development of our ‘simulator’ will integrate data from Martian dust Climatology and data of the Martian relief (geology) following the latitude and longitude on Mars planet. The final outcome in an exhibition space (or on a stage) will present the Martian landscape on a large scale immersive screen (10 to 15m wide) as  monitoring. A smaller screen will display technical and map pieces of information about the
Martian site. We also plan to develop an online simulator to be able to exchange more easily with other labs abroad and for open source. 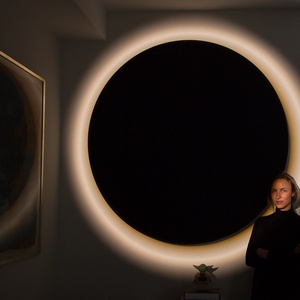 The goal of the project was to question how it is possible to make people feel a Martian landscape, through the experience of a sunset. In painting, the sunset is a classic figure. Just like Monet used to paint haystacks in the fields, we now can use Martian rover data to reproduce a landscape. In the context of Mars, recreating this distant reality implies to collaborate with scientists in order to translate raw data into sensible meanings and proof that this distant reality exists. The goal was to introduce the “real-time” component to the work: based on real-time data from the laboratory, to create an actual window on the Martian landscape rather than an interpretation. The goal was to go beyond data and talk about science in an emotional way.

The goal was, on one hand, to make the Martian research data tangible to the audience, in an emotional way, to translate raw data in an emotional meaning – which allow people to relate to the research being undertaken, which was one of the goals of public research, as mentioned by François Forget. On the other hand, reflect on a distant, yet so similar reality allows the audience to take a step back and reconsider perspective on our planet (such as the impact that the image of the earth from space had when it was released in the 60’s, advocated by Stewart Brand: it led to an awareness of a common future, finiteness). In the future, it could allow the CNRS to have a tool to get immediate visual feedback from the raw data that they get from the rovers. While it is not perfectly accurate, the crossings of the data might allow illustrating mars in a “generative” way rather than with poor quality cameras – it could be complementary.