Sign In /  Sign Up
Becoming.eco(logical)
A simulation of climate change that invites spectators to see themselves as part of the planetary image.
Špela Petrič and Miha Turšič
+
Arctur
Start of Residency
End of Residency
Artistic ProposalTech ProjectArtistOutcome
Arctur

The supercomputer is set up and configured to achieve better computing performance and a flexible set-up to adapt to the need of a wide range of users. Traditionally, they have found applications in scientific and engineering fields which require large quantity of data to be processed, like weather forecasting and aerodynamic research. Recent applications were also established in the artistic and creative industry, thanks to the rapid advances in the area of 3D technologies. With the help of our Supercomputer Arctur-2 and Data Center, we at Arctur are able to offer a wide variety of 3D modeling, animation and simulation tools that are otherwise unavailable to the average person due to high computing demands and large data involved. We enable rendering and remote rendering of three-dimensional visuals, and also carry out support services for interpretation, use, and re-use of 3D data and models. By using immersive visualization and augmented reality, we are also engaging in the domains of cultural heritage, tourism and education. https://www.arctur.si/ 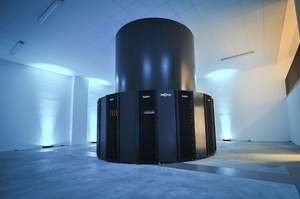 In a partnership with Arctur, CHE and Kersnikova Institute the artists attempt to picture the world of climate change composed with supercomputing capacities and enormous quantities of while providing an opportunity to the non represented environmental actors to contribute to this iconic image of the 21st century. The project is going to demonstrate embeddedness of human agency into the environmental condition and by that a transition from technological into the ecological world, where supercomputers as epistemological tools play a central role in making the world (appear) ecological.

Špela Petrič and Miha Turšič have been collaborating on mutual art projects for five years, but they also maintain two separate artistic research lines. Špela is dedicated to the researching of multispecies , while Miha focuses on arts and humanities in outer space.
This proposal is an upgrade of their Future Emerging Art & Technology (FEAT) becoming.a(thing) project, where they undertook the challenge of understanding and manifesting the artistic potential of high-performance computing. As a result of the collaboration with the artists developed a concept liberated from the complex computational technicity to underscore the (un)intentional construction of meaning by algorithmic agencies.

The artists Špela Petric and Miha Turšic have been collaborating on mutual projects for five years while maintaining two separate artistic lines. Špela is dedicated to the researching of multispecies intercognition, and Miha to arts and humanities in outer space. For Becoming.eco(logical) they joined forces and simultaneously addressed big data and carbon emissions issues. In order to do so, they partnered with Arctur a High-Performance Computing (HPC) company in Nova Gorica, Slovenia. Arctur traditionally works in scientific and engineering fields which require large quantity of data to be processed, like weather forecasting and aerodynamic research. For this project, they made their supercomputing power available to the artists.

The team created a model on climate change looking at how the carbon flows in our society from the two last centuries. They demonstrated the embeddedness of human agency into the environmental condition and the transition from technological into the ecological world. From this model, data visualization was created presenting the impact of humans on carbon flows since the industrial revolution on a yearly basis. To create this model, the team tempted to understand the climate vast machine. The artists gathered a large amount of climate and weather data from global organizations and dug into them. While processing the data, they worked on two anatomies: temperature as a climate fact and carbon flow as a climate fact. They finally decided to observe humans as environment agents.

Interview with Špela Petric and Miha Turšic at CENTQUATRE-Paris, during the STARTS Residencies Days 2020