The challenge of the project is to prototype an immersive and interactive content for collective virtual reality : imagining and realizing together an experience using 360° projection and both individual and crowd interactive technologies (Motion Capture, leap motion, gesture recognition, audiometer, augmented, reality) to serve the artistic project and create a sensitive and emotional experience for the public. This experience will be the first interactive experience broadcasted in Le Cube. It will join the store of immersive experiences we already created, and be part of the programmation in all the Cubes of the smart city. 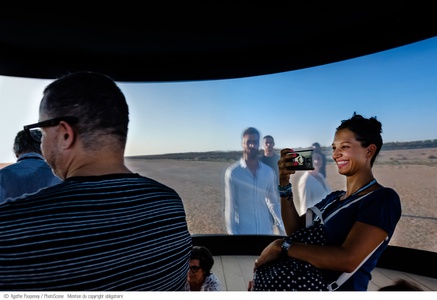 FROTH OF THE DAYDREAM - immersive, interactive and sensitive experience

By entering in the CUBE, the spectator is immersed in a poetic world ...

On the circular screen are projected at 360° memories, the main character of FROTH OF THE DAYDREAM. In this space of reverie, at the surreal but concrete physics, characters and places appear as memories. Colin's voiceover accompanies the spectator's live experience and links the different visual universes in the narrative. Soon the spectator embodies Colin: he becomes the driving force of everything that goes on around him.

The gameplay of the viewer is developed from our body and sensory memory.

The artistic challenge of setting up the interactions is:

- to identify precisely what movement the visitor will have to do, to feel, himself, the emotions of the character, and chose what sensors will be used.

- to define how each movement will alter the immersive universe.

The artist’s bias is to propose an abstract representation of emotions through the different states of water and to be able to create shaders. These emotions-shaders will modify and transform the immersive narrative images to 360 ° by playing, for example, on the absorption and diffusion of light, on the texture, on the shading, and on the sound ... The whole narrative space becomes a tangible and multisensory interface. The viewer enters Colin’s skin, crossed by his history, his joys, his desires, his fears ... 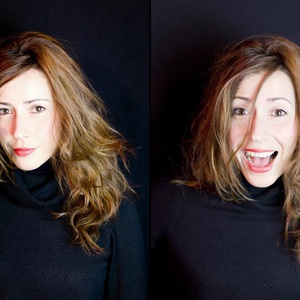 Julie Desmet Weaver has been trained in Marseille at the Conservatoire d'Art Dramatique, and in dance at Studio-Ballet Colette Armand. Then, in she plays in several performances. She received the Mounet Sully Prize for her interpretation of poetic works.

She creates, with the choreographer Eugénie Andrin the show \"PHEDRE LA DERNIERE DANCE\" with Jean Guizerix / danseur étoile de l'Opéra de Paris. This creation was supported by the National Dance Center à Paris. Last year, this performance was programmed at the Festival \"Myths in the city\" in Romania, in 2017.

Since 2013, Julie Desmet Weaver has been involved in the exploration of writing involving digital language, in order to offer new experiences to the viewer and to initiate meetings around literary, visual, sound and interactive stories.

This residency project was led by Julie Desmet Weaver, a stage director also trained in dance. She explores digital language, creates new experiences and initiates encounters between literary, sound and interactive stories. She worked with Black Euphoria, a communication consultancy agency and a creative digital studio. Black Euphoria developed LE CUBE, an 8-meter-diameter cylinder with a circular screen and spatialized sound dedicated to collective virtual reality. For the centenary of the birth of Boris Vian in 2020, Julie Desmet Weaver decided to stage the French author’s famous jazz novel “Froth of the Daydream”. The team reproduced the hero’s bedroom inside the technical setup of LE CUBE, creating an immersive participatory experience where the audience becomes an actor in the story. The scenario evolves depending on the interactions of the people inside the cylinder. Together, the team created a 12-minute immersive and interactive collective experience. The audience of up to 6 people can experiment with iconic inventions from Boris Vian’s novel: they can play music on the pianocktail, learn to dance the biglemoi, and even throw antiwaterlily flowers on the wall. One of the technical setup’s strongest assets is its transportability. It is possible to present “Froth of the Daydream” in various places, and reach a wide audience. With this work, Julie Desmet Weaver sheds new light on Boris Vian’s work and invites people to rediscover it through an innovative setup.

Making of Froth of the Daydream

At the beginning of the project, the Tech Project wanted to provide the artist with the technical setup in order to produce a new kind of performance. At that time the technology inside LE CUBE was quite simple and hardly interactive. They were considering interaction using devices like remote controls. They had many discussions with the artist. When she was in Marseille they tested it and realized it was not working. They were looking for something “magic”. So, together they decided to totally re-invent the technology. They wanted the audience to enter LE CUBE and collectively interact without any device. This resulted in a combination of 360° mapping projection and collective interaction. The easiest way to mix these technologies would be to use motion capture. As they did not want the audience to wear sensors because they found it too intrusive, they rejected this option. This is when they came up with their disruptive innovation: a new kind of volumetric capture. The idea is quite simple, it reads volumes and the people inside these volumes, in real-time. This reading is used to create a narration that opens up a new kind of live performance. For now, the technology is still under development, but the tech team is already testing it for other projects. This residency has been highly beneficial to both parties. Julie Desmet Weaver has found a way to create magic-like interactions, and Black Euphoria an innovative technology to use on new projects. Apart from the technology, it was a great human experience that allowed Black Euphoria’s coders to express their creativity and touch of craziness. Finally, this experience is an innovative artistic form allowing to present “Froth of the Daydream” to a new audience.