LUCA is a four-year project tackling the growing societal need for sustainable healthcare by producing a novel, point-of-care, low-cost device for the screening of thyroid nodules. The device will combine two photonics systems, near-infrared diffuse correlation spectroscopy and time-resolved spectroscopy, with a multi-modal ultrasound system and a probe that enables multimodal data acquisition for the screening of thyroid nodules for thyroid cancer. The LUCA device has the potential to represent a very innovative tool for other types of cancer diagnosis, screening and therapy monitoring in areas of the body accessible to both ultrasound and near-infrared diffuse optical technologies. LUCA is therefore expected to have a significant impact on the field of thyroid cancer but also additional areas of cancer screening. 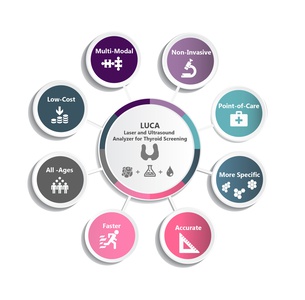 The project Beyond Absolute has two components. The first is the creation of personalized acousmatic soundscapes based on the data generated by the LUCA diagnostic device in conjunction with sonic alterations that represent the subjective mindset of the patients. These acousmatic soundscapes would be as portable and non-site-specific as the LUCA device itself.

The second component of the project consists in an interactive audio-visual installation that presents such soundscapes together with visible laser projections whose patterns would be partly determined by the movements of the audience members through installation space, and partly by the of light in the LUCA device.

The title of the project refers both to the representational character of the work proposed here (as opposed to absolute music), but also to the effort it to transcend, without denying, the objective physiological measurements at the root of modern scientific medicine. 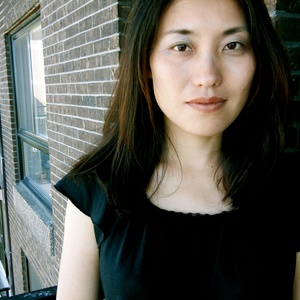 Composer and sound artist Reiko Yamada is originally from Hiroshima, Japan. Her works , orchestral and electroacoustic music, sound art installations and interdisciplinary collaborations. In recent years, her work has on a research in the aesthetic concept of imperfection in a variety of contexts, all the while maintaining a constant concern for empathy and carefully honest representation of the human and geographical contexts from which she finds inspiration. Yamada holds a doctorate degree in composition from McGill University and has received numerous prestigious awards and fellowships, including a Radcliffe Institute for Advanced Study fellowship (Harvard University, 2015-2016) and the Artist-in-Residency at the Institut für Elektronische Musik und Akustik (IEM, University of Performing Arts in Graz, Austria, 2016-2017).

Beyond Absolute is an artistic research project in collaboration with medical professionals, photonics researchers and thyroid cancer patients, suggesting a new way for communication that takes place in the doctor’s office. The project provides each patient with personalized acousmatic soundscapes, along with the conventional medical exam data, after the screening of thyroid using the LUCA device at the doctor’s office. The aim of this project is to offer sounds with physical and psychological conditions of the patients at the moment represented, something other than data which shows “normal” and “abnormal” numbers. The project was created in hope for sparkling another kind of conversation in the doctor’s office which values patient’s subjective view of physical and psychological condition, as well as acknowledging and legitimatizing abstract and fluctuating symptoms that are often associated with thyroid conditions.

The core part of the soundscape is based on the audio questionnaire, in which patients navigate through questionnaires created entirely with sounds. Therefore, it gives patients a tool and time to reflect on their symptoms without using words, which is directly represented in the final outcome.

The project’s purpose is not a medical diagnosis. The focus of the project is a personal reflection of the physical and mental state of the patient, and a communication between the patient and medical professionals. The title of the project refers both to the representational character of the project (as opposed to absolute music), but also to the effort it makes to transcend, without denying, the objective physiological measurements at the root of modern scientific medicine.

The symptoms of thyroid cancer and, more generally, thyroid-related diseases vary quite a lot from patient to patient and from moment to moment. In addition, they affect patients at a multiplicity of levels, ranging from the most readily observable physiological condition (e.g. body temperature) to the subtle phycological effects. It is difficult, if not impossible, for communication between clinicians and patients to consider the entirety of the experience, physical and psychic. While the development of devices such as LUCA is extraordinary promising in the accuracy of diagnostic it makes possible, and while such a technology is bound to bring about an admirable improvement in the quality of life of those patients who will be able to avoid invasive procedures, the enthusiasm that such promises legitimately generates risks obscuring the fact that the difficulties in communication described above are likely to continue. Combining the technology of the LUCA device with the musical communication mean developed by the artist, this project breaks new ground in medical research. The way it rethinks the patient-doctor relationship is a basis for reflection for the medical profession. LUCA being an H2020 project, it gathers partners from several European countries. Once the trials on patients will be finalized in Barcelona, the team will present the results to the consortium and easily spread them widely in Europe. This will allow a larger reflection on patient-doctor relationship and similar communication means to be initiated in hospitals.

Interview with Reiko Yamada and Ilona Schneider at CENTQUATRE-Paris, during the STARTS Residencies Days 2020