Single trapped atoms can only be admired in modern research labs inaccessible to the public. Besides the Dalai Lama, only a few hundred people have had a chance to experience the fluorescence of a single ion (a charged atom) through a microscope. Nevertheless, the brightness of such an ion is comparable to that of the North Star, which can clearly be seen without any tools. The task is now to develop an imaging system and an adequate environment that will enable viewers to see a single atom in free space. A lattice of trapped atoms can also be made visible, undergoing quantum jumps from bright to dark states – one of the most peculiar features of quantum physics. In detail, the researchers will develop a free-ranging imaging system that will enable viewers, traversing an immersive environment, to witness single atoms afloat in an ion trap. 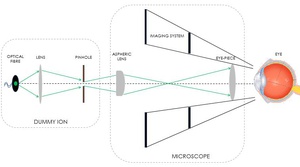 Although the originators of quantum theory were convinced that perceiving, let alone manipulating individual atoms would forever remain a mere thought experiment, their conclusions were decisively inverted by the invention of the laser-cooled ion trap. Not only did it enable the first observations of a single atom’s quantum behaviour, it is currently paving the way towards quantum computing and exotic physics beyond the Standard Model.

In collaboration with the 5th Physical Institute of Stuttgart University, the artists propose to develop Atom Chasm, a laser-cooled atom observatory probing the slippery frontier between quantum and quotidian reality.  The first artwork to ever be presented on the atomic scale, Atom Chasm will be an immersive ion trap installation, enabling audiences to intimately confront such paradoxical phenomena as quantum jumps and the symmetry breaking of the early universe.  These confrontations will prompt a wealth of philosophical questions as to the nature and provenance of matter, as well as to the limits of human knowledge. 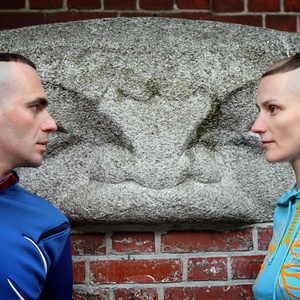 Dmitry Gelfand (b.1974, St. Petersburg, Russia) and Evelina Domnitch (b. 1972, Minsk, Belarus) create sensory immersion environments that merge physics, chemistry and computer science with uncanny philosophical practices.  Having dismissed the use of recording and fixative media, the duo's installations and performances comprise ever-transforming phenomena offered for observation. Because these rarely seen phenomena take place directly in front of the observer without being intermediated, they often serve to vastly extend one’s sensorial thresholds. Domnitch and Gelfand are recipients of the Japan Media Arts Excellence Prize (2007), and five Ars Electronica Honorary Mentions (2007, 2009, 2011,2013, and 2017).

Dmitry Gelfand and Evelina Domnitch create sensory immersion environments that merge physics, chemistry and computer science with uncanny philosophical practices. Having dismissed the use of recording and fixative media, the duo's installations and performances comprise ever-transforming phenomena offered for observation. For this residency, they worked with ArtAtom, a project led by the 5th Institute of Physics of Stuttgart University. The challenge of this residency was to realize a free-ranging means for observing trapped ions that is safe for audiences, yet does not undermine the ambience of the ions’ delicate light. To meet this challenge the artists were provided with lasers, optics, optomechanics, electronics, detectors, guiding systems, and laser security. Together with the lab, they worked on developing a laser-cooled ultra-high vacuum ion trap, coupled with a free-ranging optical system. The team wanted to build the first artwork to ever be presented on the atomic scale.

If the residency period is over, the collaboration is still ongoing. Atom Chasm, the laser-cooled ion trap laying bare individual atoms is not finalized yet. During the residency period, they designed several side artworks that allowed them to experiment with their technologies, define the best design to reach their goals and present the ongoing progress to the audience. One side project Hilbert Hotel was presented during the STARTS Residencies Days in CENTQUATRE, Paris. It is a curvilinear ion trap that electrically levitates its myriad microscopic guests. Hollow glass microspheres float along startlingly square-shaped orbits, tracing the quadrupolar electric fields that keep them airborne. When charged particles are levitated by electric fields an exotic state of matter emerges, known as a Coulomb crystal. Paving the way to quantum computers and to physics beyond the Standard Model, Coulomb crystals also offer uncharted perceptual territory.  Their direct observability has led to a series of ion crystal artworks that will culminate with Atom Chasm. 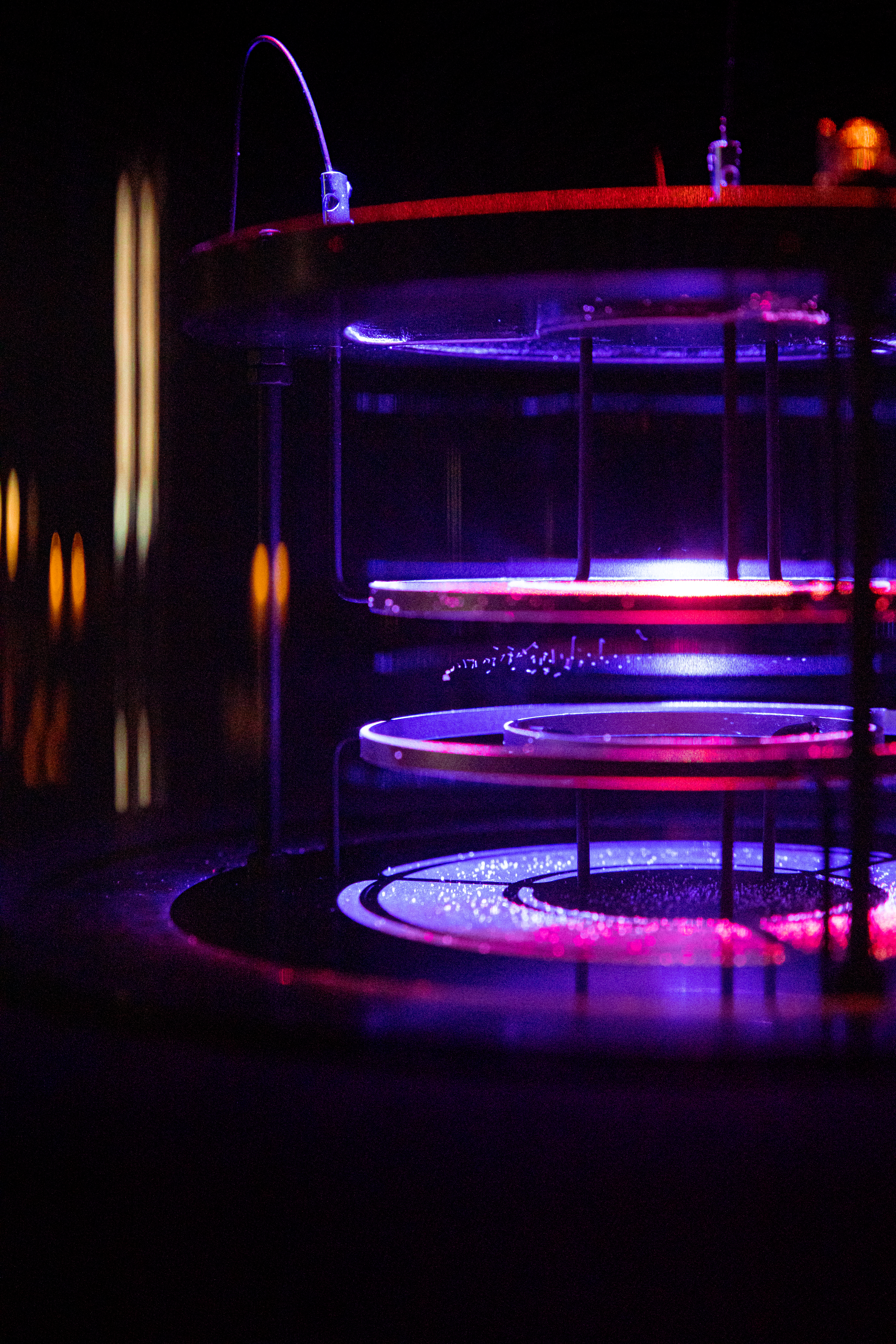 Hilbert Hotel at the CENTQUATRE-Paris during the STARTS Residencies Days. @Quentin Chevrier

The linear Paul trap, upon which “Atom Chasm” is based, might pave the way to the first quantum computers. Thanks to the residency, the team experimented this trap and broaden its scope of use. Though only in its infancy, the rapidly evolving field of quantum informatics (encompassing a vast spectrum of disciplines from quantum optics and cryptography to tabletop cosmology) offers powerful means of tackling numerous global emergencies. “Now, previously untapped aspects of quantum theory are ready to be used as a resource in technologies with far-reaching applications, including secure communication networks, sensors for biomedical diagnostics and fundamentally new paradigms of computation”. [Quantum Manifesto: A New Era of Technology, 2016] In addition to the technical experiments they conducted during the residency, with “Atom Chasm” the team seeks to raise awareness of this invaluable roadmap to pivotal, visionary solutions for the imminent future.

With the dissemination of their works, the team would like to convey a larger philosophical message to the audience. Perhaps no less significant than its potential applications, the capacity to directly perceive the light emitted by individual atoms entails a transformative philosophical and emotional experience as well as an inversion of an overgrown cultural tendency. Since time immemorial, and especially in the arts, there has been an “idolatry of gigantism”, an urge for expansion, whereby the spectacular is often synonymous with being of spectacular scale. Hopefully this bias has no longer any place in science, but it still persists culturally. Thanks to Atom Chasm, and the different side projects created during this residency, the team would like the audience to (re)learn to value and appreciate the beauty of minimalism. The residency was an impactful journey for both the artists and the Tech Project. According to them “even beyond the finalization of the artwork, there is no shadow of a doubt, on the part of each team member, that our collaborative pursuits will fruitfully progress deep into the future.”